People often ask what careers are best for those that are wondering how to become a Texas Private Investigator. 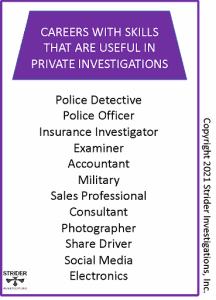 There are a number of skills that are useful in our world, from sales to accounting to sketching to research – so there are many ways to become a Texas PI.

The list of careers in the chart is not exhaustive.  I know a former nurse who is now a PI and specializes in wrongful death in hospitals.  Somewhere there is a PetDetective.  I’m sure of it.  I just haven’t met him or her.  Whatever your skillset, it probably has a use in the PI world.

Someone who worked for me undercover had been a photographer and a hunter.  That combination made him perfect for rural surveillance (ie wearing camo, hiding in the woods, and taking long-shot photographs).  Another PI I know was an attorney but prefers to work as a PI.  He’s perfect for complicated cases and often schools me on the finer points of the law.

I must mention that a lot of people who call me and ask how to become a PI have watched a lot of TV police or investigator shows.  They think being a PI is easy, that they could do it right now.  I call this the “Hollywood PI” phenomenon.  It seems everyone feels they could be a PI.

Let me say this, I actually agree with that statement.  Most everyone could become a PI but it requires making the commitment to learn the skills.  I tell people there are “1,000 take-aways” you need to know to be any good at private investigations.   If you have no training and I put you on a case, you could wreck it in minutes.

Here’s an example: when it comes to computer investigations, an investigator often uses Facebook to find out about a subject.  Novice investigators don’t realize that even though looking at someone’s FB doesn’t immediately alert the subject that they’ve been looked at,  Facebook often throws your FB into their recommended connects within days.  Therefore, just by doing something as simple as looking at someone’s FB page, you can inadvertently reveal yourself and the investigation.

Here’s another example: when it comes to surveillance, doing something as simple as parking in the 10-2 of the subject when he comes out of his house or drives down his driveway can give you away.  If you don’t know what the “10-2” is, take our course!  There are many ways to mess up a surveillance if you’re inexperienced.

One time I had a trainee climb into the back of his vehicle to watch a house, parked right in front and started taking pictures with his Canon camera.  This is a standard tactic, EXCEPT, he had no tint on his windows!  The subject could see him.  Also, parking in front of the house was a junior mistake.  The subject was so upset he got the license plate and found a friend who could run it for him.  The next day he went to the home of my trainee and that scared him.

I had to have a chat with the subject about that.  I introduced myself.  I made it clear that whomever provided that plate information, likely violated the law.  Also, visiting my trainee was across the line.  I explained what I would do if it happened again.  Either way, it was a good lesson for my trainee – one he will never forget.  This isn’t a game we’re playing.  Our actions as investigators have real consequences.  I tell everyone that every case is like the Superbowl.  Bring your A-game or don’t come at all.

If you think you can handle being a PI, you’re probably right.  Do more research on how to become a PI – including reading my articles.  Then commit yourself and get started learning.  Come train with us and we’ll show you how to become a Texas Private Investigator. Or train with someone else.  The most important thing is to get started.  This is the greatest career on the planet.  I hope you decide to join us. Check out what we can offer here.